Find a Charter Flight To Moscow

Moscow is one of the oldest and most beautiful Russian cities. The emperors, or tsars, made the city their base of rule until 1712, when the capital was moved to Saint Petersburg. Moscow was restored as Russia’s capital in 1918, and it served as the capital of the Union of Soviet Socialist Republics (USSR) from 1922 until 1991. Since then Moscow has been the capital of the Russian Federation.

Moscow has a long and dramatic history. The city has been completely destroyed and rebuilt again many times throughout the years. Its most ancient wooden buildings disappeared in fires. Each time the city was resurrected from the ashes, it became more and more beautiful. For every rebuilding, the most talented and famous architects were invited from around the world to restore Moscow.

This history of reconstruction Moscow has undergone is part of the reason she has absorbed the many different and diverse styles that visitors experience here. Stalin’s epic and monumental buildings neighbor with small two-store nineteenth century town houses, while splendid cathedrals peer out from behind modern skyscrapers. Even in the heart of Moscow, in the Kremlin, old churches compete with the immense Congress Palace for space.

Despite the size of the city (about 900 square kilometers) and the scale of many of the buildings and avenues there, the general layout is easily grasped – a series of concentric circles and radial lines, emanating from the Kremlin; the center being compact enough to explore on foot. 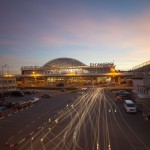